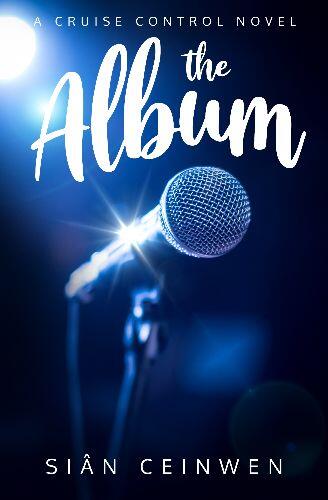 Fall in love with Ariana and Gabriel as Ariana enters the world of Cruise Control.

The perfect man. His screaming fans. Can someone who hates the spotlight find love with a rock star?

Ariana isn’t a fan of celebrities, but she is a fan of Cruise Control. The night she attends a charity event with her aunt and meets rock star, Gabriel Knight, sets in motion a rollercoaster ride that is out of her control.

Hiding her struggling self-esteem behind a wall of privacy, Ariana risks it all and joins the group on their first tour as the lead singer’s new sweetheart.

But when she’s suddenly thrust into the wild world of a rock star, the sour taste of the limelight could be their undoing.

Will life in the fast lane ruin Ariana’s chance at true love?

The Album is the first book in the electric Cruise Control romance series. If you like sudden, steamy relationships, taking big risks, and the lives of the rich and famous, then you’ll adore Sian Ceinwen’s debut novel.

Continue in the Cruise Control world as Heather and Harrison prepare for their wedding.

Marrying a rock star. It’s harder than you think.

Heather York’s life was a complete breeze. Sure, she was working herself to the bone on her recently launched fashion line, Serenity, in preparation for its debut at New York Fashion Week.

Yes, her boyfriend, Harrison Fletcher, did happen to be one of the world’s most famous rock stars. Oh, and he had also just proposed which meant that she had a star-studded celebrity wedding to plan now.

Did she mention that her ex-best friend, Ariana Chamberlain, had just walked back into their lives after cutting them all off completely two years ago?

No, her life wasn’t complicated at all.

The Wedding is the follow-up to Sian Ceinwen’s debut novel, The Album. Dive back into the world of Cruise Control, as they navigate the tricky path of life in the spotlight as the world’s most famous rock band.

Follow along as Sebastian Fox, the world’s biggest playboy finally meets the woman who challenges everything about him.

Lita Ciccone just wanted to meet her favorite band. She had no interest in tangling with sexy guitarist, Sebastian Fox, whose favorite past time is groupies.

Then she meets him. He’s smart, he’s funny, and he calls her princess. Suddenly, she understands why so many women fall at his feet, because that’s exactly what she wants to do.

They spend one amazing night together, and their contraception fails. Now, Lita is facing a life tied to the world’s biggest player.

Sebastian is sexy as sin, but can she really raise a baby with him?

The Baby takes you back into the Cruise Control world as Sebastian discovers the price of having a reputation that precedes him.

Fall in love with Gabriel and Ariana all over again as Cruise Control embarks on their first world tour.

The rock star always gets the girl…

I’m living my dream. For as long as I can remember, I’ve wanted to be a rock star. And now here I am, about to start my first big tour, when she comes along.

From the second we meet, she’s all I can think about. Asking her to come on tour with me is easy. But she’s shy, insecure, and the paparazzi scare her. We live in two completely different worlds.

I love her and I know that she’s worth fighting for. The problem is, I’m not sure if love is enough.

Gabriel’s Album is the first book in the Cruise Control Heroes series. It’s the companion novel to The Album. It will be released on the 14th of March 2021.

This novel weaves a tangled web between reality and dreams, where the lines are blurred between what is real and what is not.

What happens when you fall in love with a figment of your imagination?

Cheli is just trying to live her best life, when she meets the perfect guy, Matt. The catch? She meets him in a dream.

Struggling to balance her real life with her dream reality, Cheli and Matt continue to meet in her dreams and she finds herself falling in love with him.

How can a relationship feel so real when the very foundation it’s based on is not? How can Cheli cope when the man she loves doesn’t really exist? Or does he?

This is last week’s fic, which I know is super duper late! I’m so, so sorry. It’s been hectic at work, but just four more weeks and I’ll be finished there. I’m behind on all my smut writings for August, but I plan to catch up very, very soon. Well…today. I have to...

Once again, I made it to the wheel of smut draw. Look at me doing it two weeks in a row. 🤣 You can watch the draw by clicking here. Gah, please don’t hate me $2 tier folks, but this is another fic where I just feel like a second part is required. The photoshoot is hot...

Trigger Warnings: This fic includes hardcore scenes of domestic violence, rape, degradation, vomiting, and death threats. If these are triggers for you, please consider skipping this story. ★★★★★⁠⁣⁣⁣⁣⁠ THE BELOW CHAPTER CAN NOT BE CONSIDERED CANON Shame and anger...

At what point in our relationship will you give in, Ari? How many years would we need to be together before you would feel comfortable telling the world about us?

I would crawl over broken glass to be with you, Lita, and that is terrifying for me.